Whenever an individual get a call for job change there are few standard questions which are been asked. I also follow the same path to prepare myself for Job interviews. But there is always a habit of expecting same answers from different individuals which can some time pull over the interview process 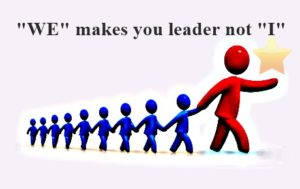 As an individual I have been brought up in a society where using “I” frequently considered as over-confidence and self-praising trait. So we developed a habit of using “WE” more than “I” even if the particular task is been completed individually. So when I got a call from reputed Banking Company which started my interview asking few introductory questions. The interview was for lead role. Then it became intense when scenarios were placed on the table and opinion/ approaches were been discussed. Suddenly there was a weird order from interviewers – “Please don’t use ‘WE’ try to explain me what have you done and use ‘I’. I don’t want personalities using ‘WE’ in their sentences.”
This triggered my conscious but due to heat of the hour I tried changing my 25 years old habit of replacing ‘WE’ with ‘I’. Internally I know I am forcing the issue. Surprisingly I got selected in the process but my conscious has not allowed me to accept the offer because I don’t want to go on the technology path alone using singular sentences. I want whole team and organization with me in both good and bad times in my career.
This was not the end of such expectation. I went through 7 such interviews in which expectations were same. There may be factors such as fake resumes, fixed interviews and compromised hiring which forced them to have such expectation.
But when I think back in times and remember quotes by legends such as Ratan Tata
“If you want to walk fast, walk alone.
But if you want to walk far, walk together”

I always start advocating the approach of moving together.
Then suddenly there comes the point of mid-level or senior leader. We should always bolster the point that every individual want respect and involvement. A simple help in mammoth and tough project can be equally important and should be appreciated. It doesn’t take much to use ‘WE’ or ‘US’ rather than ‘I’ or ‘ME’ in any project delivery path.

I can resist myself for an opportunity which allow me to think for all rather than myself or any particular individual. Then I went through the careers of multiple individuals and gone through their LinkedIn profiles and guess what I found almost everyone use ‘We’ more than ‘I’. Finally I start looking for any particular article on world wide web which is synonym to which I want to communicate I found below written blog on HBR(Harward business Review).
https://hbr.org/2015/03/if-you-want-to-be-the-boss-say-we-not-i
If we really want to get the right traits of leader following article I wish to send copy to the respective interviews which you people can also go through.

Ending with the positive quotes on the internet I rest my case.
“When ‘I’ is replaced by ‘WE’ even Illness become wellness”